The following is a brief journey through the Nambucca Valley Conservation Association’s changes, challenges and battles won and lost over the last quarter of a century.

On March 31st 1981, a public meeting was held in the CWA rooms in Macksville to form the Nambucca Valley Association (NVA) and although the attendance list seems to have parted company with the old minutes, we know that an executive was elected that day; President – Malcolm Ellis, Vice Presidents – Bob Carline and Ian Robinson, Secretary/Treasurer – Richard Laxton, and Publicity Officer – Peggy Herbert. Unfortunately, the Aims and Objectives of the newly formed group have also disappeared, however notes from the discussion held at the meeting make it clear that NVA’s intention was to gather information on a range of issues including water supply, pollution, chemical disposal, weed eradication, shire planning, sporting facilities, rights of ratepayers, fire trails and to build a harmonious working relationship with Nambucca Shire Council (NSC).  Today we still work on all but one of these issues (sporting facilities) and probably are more realistic about the “harmonious” working relationship with council.

In November 1981 Lyn Orrego was unanimously elected NVA president.  The group marched on, keeping a close eye on NSC and commenting on many activities and proposals of the day, including one councillor’s push for a pulp mill in the shire, the proposed sale of part of Coronation Park, pesticide use, Bellwood and Nambucca Heads high rise proposals. We also began lobbying for open local government.

By 1986, NVA was a well established local voice for open government and conservation in the valley with much media coverage on key issues. We were producing a modest newsletter and thinking about the possibility of an environment centre for the valley.  Our consistent contact with NSC on a range of issues must have been challenging for a rural council unused to being so thoroughly scrutinised.

It would appear that much of NVA’s input into local government issues was poorly received.  It is little wonder that more and more council meetings were being held behind closed doors! Members worked on a range of issues from natural head lice control (!) and noxious weed management to protection of wetlands and detailed submissions on council’s planning processes.

In recognition of the deteriorating health of the Nambucca River, we lobbied the state government for an integrated study into the river system, something that eventually happened 14 years later!

In 1987 our very own president Lyn Orrego, was elected to NSC firmly waving the conservation banner.  We were inside the castle and shifted up a gear.  By 1988 our key issues were listed as non chemical methods of growing and weed management, water quality and quantity, catchment health, tourism strategy, canal estates, planning, fire management, river health and dredging, recycling, Warrell Creek Nature Reserve, koalas, birds and wildlife in general, wetlands, high conservation areas identification, crown lands, fluoride, reafforestation and tree preservation. We were young and enthusiastic!

We were also producing Environs, a monthly regional environment magazine covering local items plus environmental news stories from around the planet and featuring the artwork of Julie Mozsny, Lyn Orrego and many others. Over the ten years of production, Environs reached circulation levels in the hundreds and required a serious editorial and marketing team headed for many years by Carol Margolis.

In 1989 a public meeting was held to discuss the establishment of an environment centre.  Awareness was brought to the growing number of local community environment groups which could use such a facility: People for Nuclear Disarmament, the North Coast Environment Council, Three Valleys branch of National Parks Assoc., Nambucca Natural Growers, Nambucca Reafforestation Society, and local catchment protection groups.

By 1991 we had added the word Conservation to our name to better reflect our core focus. We had also established an Environment Centre upstairs in the Bowraville Community Centre. 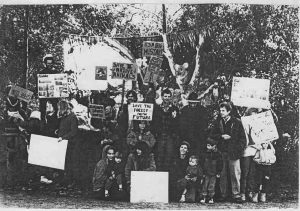 It appears that by this time Nambucca Valley Conservation Association (NVCA) was seen as a force to be reckoned with, as opposing forces made up of gravel extractors and conservative farmers, stacked the Environment Centre committee and looked set to have a go at NVCA’s committee too.  We witnessed the formation of the valley’s first fake conservation group.  It was a time of growing up and closing ranks for the 10 year old NVCA, but with Lyn re-elected for her second term in council we weren’t backing down, on the contrary.  We became incorporated and started vetting our membership applications. 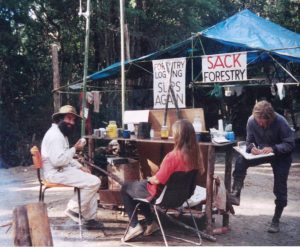 The nineties were a marathon of forest campaigning for the protection of old growth forests on public lands with NVCA members involved in numerous blockades, delegations to ministers and agency officials, meetings, forest scouting and survey expeditions. The depth and extent of member’s commitment to this critical and very public issue can barely be touched on here. This was as much an issue of the heart as it was of science and many tears were shed along with burnt out members. Our eight filing cabinet drawers of forest files, piles of information boards, old posters, photos and banners are testimony to an intense, challenging and exhausting period in our group’s history.

If not for our local efforts and that of similar groups up and down the NSW coast, especially the North East Forest Alliance, we would not now have the additional 737,600 hectares of HCV public forest reserved in new National Parks and Nature Reserves in north-east NSW or the additional 310,000 hectares of State Forest protected from logging in Special Management Zones. 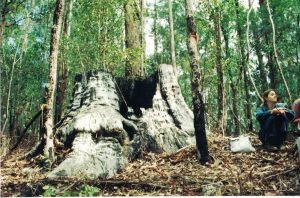 In 1994 we launched the Dunggir Conservation Proposal and thanks to Lyn Orrego’s flight from Sydney being delayed, Paula Flack nervously launched herself into public speaking at short notice, with her first ever speech, to a packed Community Centre and TV cameras.

NVCA also played an important role challenging the escalating frenzy of gravel extraction from the channel of the Nambucca River on various private properties in the middle and upper catchment. We questioned Council’s role in the permitting of these activities.  ICAC and the NSW Ombudsman both investigated Nambucca Shire Council’s activities with regard to the extractive industry.  The Ombudsman stopped just short of finding NSC corrupt in its recognition of numerous Existing Use Rights to extract gravel stating “… it is difficult to posit motives other than corrupt”.  In response, the state government outlawed in stream gravel extraction in the Nambucca.  Later, in 1999 the much awaited Lyall and Macoun River Catchment Study vindicated all that NVCA had said about the disastrous environmental impacts of this damaging practice.

1995 saw our issues list grow to 33, including lobbying for the various areas of public forests we had nominated for protection in the proposed  forest reserve system including Mistake State Forest, Yarrahapinni Mountain, Oyster Creek, Little Wonder and expansion of the Ringwood Flora Reserve.

We were also onto riparian vegetation rehabilitation and promoting incentives to farmers for its protection, remnant vegetation conservation, stronger environmental policies in council and sustainable water management.  The NVCA’s office now boasted four computers, a fax, photcopier/printer, an extensive library and shock horror, an air conditioner! 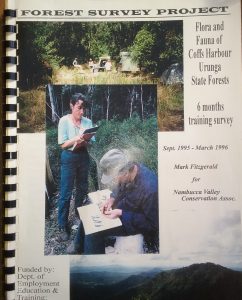 For a number of years we sponsored a series of Jobskills participants who fulfilled the role of office coordinator. Needless to say we selected individuals with a strong conservation ethic and so had our first paid workers, without paying a cent.  Around this time, the Minister for the Environment announced to our utter delight that Dunggir National Park would be gazetted.  NVCA had its first major win and we celebrated appropriately in the forest at the foot of the new park on Trevor Bailey’s property at the top of South Arm.

NVCA’s bank balance almost exploded in 1995 with the granting of our Commonwealth New Work Opportunities application for $130,000. We planned to run a flora and fauna survey field assistant training program, our motives naturally being entirely focused on saving forests. We engaged flora and fauna consultant Mark Fitzgerald for six months to train 12 unemployed people, whilst undertaking forest surveys.  Naturally we targeted areas of high conservation value that we were keen to see included in the state government’s proposed reserve system.  Our office space doubled with the addition of the second upstairs room in the Community Centre to accommodate all the new activities, meetings and training…we were on fire!

The late nineties saw many changes for the NVCA.  Environ’s editor Tom Goodwin, who brought his wonderful warped humour to the magazine and NVCA in general, decided it was time for a break and with no replacement editor in the wings, Environs days were numbered. The last edition went out in March 1996.

Home computers became the norm and our stuffy, cramped Bowraville office became less relevant to our operations. More and more work was being done at home on PCs and via email, saving fuel and travel time.  The office became more a storage area than work space and after much deliberation and a little sadness, it was finally decided that the Environment Centre/office would close.

This was a period of stakeholder representation on various government committees eg forest reforms, water reforms, native vegetation reforms, Pine Creek Koala Management Plan committee and Catchment Management Boards in which NVCA members were significantly involved.  In hindsight, the environmental benefits of our enormous input was varied, as members were buried under the mountains of paperwork and exhausted by endless meetings. Some in the conservation movement said we had been hoodwinked into distractive processes. There’s little doubt the Government strategists were saying “they wanted consultation, we’ll give them consultation”.  These were tough years for members with very few rewards.

The naughties brought a new local environmental challenge – floodplain gravel extraction. With Council cheering from the sidelines, a local extraction company released its Environmental Impact Statement (EIS) for a proposed massive floodplain gravel extraction operation at Dyers Loop.  NVCA joined forces with local resident’s group Householders United and engaged the services of fluvial geomorphologist Dr. Daniel Martens who challenged the EIS with professional ease.  The Minister called for a Commission of Inquiry into the proposal in 2002 and after a gruelling “David and Goliath” inquiry, the Commissioner found that the social and environmental impacts were too significant and recommended that the proposal not go ahead. The river gained some breathing space and NVCA gained some new members!

During 2003/4 NVCA put all its’ muscle behind then president Paula Flack’s run for local government and after a strong and conservation focused campaign, saw her elected on primary votes alone, sending a clear message to council that the environment was firmly on the valley’s agenda.

One consistent activity in which NVCA has proven itself again and again over its 25 year existence is fundraising, fundraising and more fundraising. Be it through dinners, music concerts, raffles, garage sales, catering, film nights, membership drives or outright begging, we have kept our band of activists funded to the very best of our ability over the years. Of course, it goes without saying that our volunteer effort in terms of personal contributions of money, time, energy and love has made our organisation what it is today and can never, ever be truly measured.